The content of this blog-post was presented during the keynote titled “Success Favors the Prepared Mind”, I delivered last Friday (June 21, 2013) at the 2013 Endeavor Entrepreneur Summit, in San Francisco, California, USA.

What makes Silicon Valley[1] unique?  Does the Valley’s success lie in its geography or in the mindset of the people who live here? While many of my posts focus on the Valley as a model to learn best practices and emerging trends, today’s post picks up the historical perspective of an earlier post published exactly one year ago — on June 29 2012 (https://carlosbaradello.com/2012/06/29/mining-the-silicon-valley-mind-a-perspective/). In this post, I share the ten attributes, which emerged over the past century and a half, which help to explain this region’s dynamism. Today, I expand on a new perspective on the required characteristics of today’s arriving foreign entrepreneurs to be effective and seize the opportunities that Valley offers.

I don’t believe it is Silicon Valley’s water or air that makes its people more creative, innovative or entrepreneurial than others. Instead, I’d like to share my perspective that the Valley’s entrepreneurial mindset has been 165 years in the making. In fact, this mindset has roots in Northern California’s infamous Gold Rush in the mid-19th century.

The early West Coast of the United States was largely inaccessible to the rest of the world. It was a harsh continental landscape away from the established East Coast, vast oceans away from Asia and Europe, deserts and mountains away from its even closer neighbors in Latin America. As a result, Northern California remained sparsely populated and isolated from the rest of the world for a long time, and people did not consider it worth the trouble to “Go West.” However, all this changed when gold was discovered in 1848. 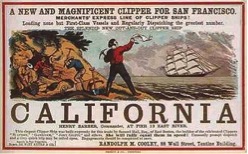 Sailing to Northern California at the start of the Gold Rush

Northern California’s Gold Rush started in 1848. Among the first to hear news of gold were people in East Asia and South America, and many chose to immigrate. Interestingly, these migrants’ motivations were very different from that of migrants who had arrived from Europe to the American Northeast two centuries prior. While the Mayflower Pilgrims came to the New World seeking the political or religious freedoms denied to them in Europe, migrants to Northern California fundamentally sought economic rewards.

The personality profile of Gold Rush migrants consisted of two key attributes: (a) a natural self-selection of risk-takers willing to migrate over vast and harsh terrains, and (b) a no-nonsense desire for economic rewards. As a result, the region’s DNA was self-selecting: people who chose to “Go West” were overwhelmingly risk-taking, adaptive, flexible, tolerant of discomfort, and even ready to die in their pursuit of economic prosperity. Seen through another lens, these migrants in fact were quintessential entrepreneurs. These gold-seekers, called “forty-niners” (in reference to the year 1849, when immigrants arrived in large numbers), often faced substantial hardships on their journeys to get here. Once they arrived, they faced mining accidents, diseases, and in many cases, death.[2]

What is the mindset required for an entrepreneur to be World Class?

Every day, foreign entrepreneurs bring their ventures to Silicon Valley in their quest to scale them up globally. Their goal is to leverage the SV ecosystem’s advantages to catapult their ventures to stratospheric success. However most of them fail. Actually many fail because the nature of this endeavor is very Darwinian, but there have been many others that were never in the running because they were not properly prepared, or had misaligned expectations, or probably some of both. The objective of the table above is to bring into focus the evolution of the Silicon Valley mindset from its early gestation days to today and what it means for the arriving global “gold seekers” of the knowledge economy. In fact these ten characteristics will help the entrepreneurs not only in Silicon Valley, but anywhere. Furthermore, as these ten characteristics are embraced by many they will help to transform the local ecosystem in a more dynamic and effective. As a summary these 10 characteristics are:

Hundreds of ecosystems pursuing innovation and entrepreneurship are sprouting up throughout world, and each one is seeking to create its own color and texture, learning from one another and improving and adapting the Silicon Valley model to local characteristics, norms and codes. Most have wisely given up any effort to replicate Silicon Valley after recognizing that the Valley could not replicate itself even if it wanted, since the conditions that fostered its creation are impossible to replicate! Without a doubt, though, gears are in motion to create such a “Global Valley”. However, this will take probably decades — note that SV construction did not happen overnight – in the meantime globally minded entrepreneurs will seek to come to the Valley, as actors dream to go to Hollywood or athletes crave to participate in the Olympics.

What do you think? Do you agree or disagree? Let me know, especially if you disagree!